Why papa Google, WHY? (Vol II)

Posted by Ben
On the heels of the rip roaring success of "Why Papa Google" vol I , I thought I'd give you all a little bit more of what you've been missing.

This week, I have been watching something called "Chimp Week" which follows a clan of chimpanzees, distilling 8 years of life into 7 days. Sweet. It's easily one of the most riveting pieces of television I've seen for a good while; we see twins born, a seemingly continuous fight for domination amongst the males, the twins get lost, the leader goes AWOL, baboons come along, leader comes back all skinny and gets his ass kicked, twins are still lost as I type, and so on and so on.

One of the things that struck me, well, my mum if you must know, was just how violent the little things were. A lot of the fight to be leader is done by posturing, a lot of tree shaking, puffing up of chests, you know the score; but there is a lot of violence that doesn't seem to permeate other ape culture such as the orangutan or the gorilla.

One time, the leader of the clan, Frodo, who was built like a brick shithouse at the time, found a little chimp just on the borders of the clan's territory; he positively beat the living crap out of that lil' ape, dragging it round, clubbing it with his fists. I no doubt anthropomorphised somewhat, but still, it was pretty shocking. Male chimpanzees will also target females a lot, in fact just about anyone who is weaker than them. Darn it they're cute though.

So anywho, I wanted to know just why chimpanzees are so violent, and I asked papa google. This time, papa google was able to give me a little bit more help than last time, when he bombed completely. I found this site which seems pretty interesting; I should really have read it a bit more closely but I just tried to get the juicy bits. Apparently chimpanzees are the most violent apes, and, whats more, they are the ape most closely related to the human race. That's pretty telling in and of itself; that the most violent ape is our closest ancestor. What's more, the site explains this in that natural selection has favoured chimps to the extent they are merely a good shave away from congress, the males do nothing but eliminate weakness and promote strength whenever possible. Other animals such as lions may well indulge in a bit of testosterone fuelled jousting for the pride, but once a winner is found, this process stops for a quite a while until the next challenge comes along.

Not so with chimps and humans, who seem genetically driven to eliminate those they see as weak, and consolidate with those they see as the elite. It's a pretty depressing forecast for evolution, but anybody whose been to school and not been the kid who kicks the shit out of everyone else can completely identify. Sadly, we cannot sit back and pat ourselves on the back in the knowledge that as we grow older we outgrow such violent, beastial tendencies. I'm sure I don't need to point to examples of colonialism/segregation/genocide/imperialism, to show that the big chimps still rule with an iron fist, and will always seek to pound on those who are of least actual threat to them.

Part of me wishes papa google hadn't thrown this up, but another part of me says, tell me something i didn't already know, papa google. 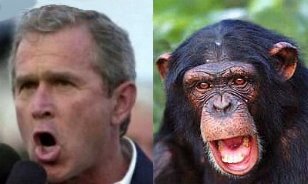