Notes On The Sopranos:
Or How An Entire Nation Has Its Mind In The Muck 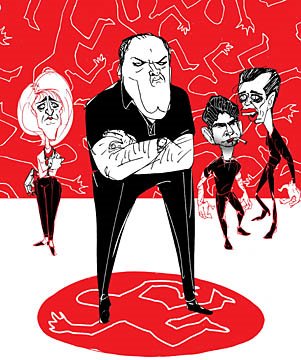 i'm not going to burden this site with a long post on this subject, but i certainly could. there is a great deal to say about the sopranos, and through that looking glass, about america itself.

what concerns me most is the recent outcry against the mesmerizing coma-induced dream sequences that have dominated the past two episodes of season six. when i caught wind of the popular distaste for these episodes, i couldn't believe it. in my mind, the sopranos is doing what it does best, but many others seem to be of the exact opposite opinion. they wish the show would get back to the good stuff already, i.e. organized crime and violence.

i now understand that i've once again overestimated the american public. believe me, i know that's a condescending thing to say, and it saddens me to say it, but i think it's true. for years i've been under the assumption that the sopranos has reached its high ranking status amidst today's oversaturated pop culture marketplace via its unique and innovative approach to an all too familiar genre.

i was wrong. the world wants bodies. and lots of them. and if it can't have bodies it wants blood. and rats. and whacks, tits and "fucks."

what it doesn't want is carl jung. but for me, that's the heart of the show.

what, i ask, would the sopranos be without its (sometimes too) heavy symbolism, its dream sequences, tony's therapy sessions, the always present tension between sin and redemption, between the self and society? it would be a better than average mafia show that grew stale after one season. and i don't know how you feel about it, but between goodfellas, the godfather, and donnie brasco - that territory seems pretty well covered to me.

so here i am, back to feeling bewildered by the mainstream tastes of this country. i thought i'd finally found an ecumenical bandwagon i didn't mind crowding into. well, i suppose i did. it's just the conversation with the other passengers that's a drag.