Still The Best Show On TV, And You Aren't Watching It

Posted by Parm
Here's how it began - an aquaintance with excellent taste in popular culture kept pushing it on me and pushing it on me, saying it might just be his favorite tv show of all time. I'd seen the ads, but had never felt compelled to watch. Just another gritty cop show right? But this recommendation raised my interest a little. After all, this was the same man who turned me onto Freaks and Geeks. Flash forward a year or so. I'm working at the Resource Center with Ben, who asks me for a rental suggestion. I say I can't personally vouch for it, but a trusted critic says The Wire is the show to see. Good enough for Ben, who began watching the first season immediately.

His first report was lukewarm, alluding to a number of cop show cliches, but he liked it enough to continue watching. The next day he came in with a slightly higher opinion of it. He decided to take out the second disc. Each day, his praise and enthusiasm increased as he burned through the first season. There were tales of some guy named Omar. He became an addict before my very eyes.

Ultimately he was so desparate to hold a conversation about what he had seen that he paid for and rented the show for Niki and me. The junkie wanted some company.

So I watched it. This show I had seen the ads for. This gritty cop show. This show that seemed to hold a special power over all who had seen it. Three seasons later I literally find myself on the verge of tears as I think about how great this show truly is.

The Wire has just been renewed for a fifth (and final, I read somewhere) season. It's currently four episodes deep into the fourth year. While it has retained a fanatic and loyal base of viewers, until recently it's been mysteriously overlooked by critics and awards. Now, in light of the new episodes, there's a flurry of acclaim. Stephen King has written an article for EW calling it a "staggering achievement":

The Wire keeps getting better, and to my mind it has made the final jump from great TV to classic TV — put it right up there with The Prisoner and the first three seasons of The Sopranos. It's the sort of dramatic cycle people will still be writing and thinking about 25 years from now, and given the current state of the world and the nation, that's a good thing. ''There,'' our grandchildren will say. ''It wasn't all Simon Cowell.''

That's the reason this show makes me want to cry. As a writer, and as a lover of film and television, The Wire represents something profoundly personal to me. After schooling myself on the classics of cinema when I was 15, I decided I wanted to be a filmmaker. The art form of movies overwhelmed me with its potential, and a great flick left me reeling for months with giddy passion. Somewhere along the line, though, I became jaded. No matter how hard I looked, I could never recapture that feeling. Enter The Wire. This television show makes me remember why I wanted to write in the first place. Sadly, despite my gushing, most of you remain apathetic about its existence.

So what makes it so great? Why is it NOT the show you think it is? Let's consult the critics. Time says:

[It's] an eloquent lament for wasted time, wasted money and wasted lives.

When you come to the end of any of the three complete seasons, you feel like someone has turned the lights on. The tragic nature of what you have just seen sinks in, infects your blood, and leaves you feeling partly responsible for all the waste. It is, ultimately, a poetic requiem for the American Dream, for what could have been.

The smartest, deepest, and most resonant drama on TV, The Wire spent its third season dredging the murky perversities of the drug underworld, and its foul reflection of capitalism as a whole. The Wire's complexity has doubtlessly contributed to its low ratings — this is a series that punishes casual viewers. But its sticky, interwoven plots, with their economic, political, and racial echoes, make blessed use of serial storytelling.

The number of levels this show succeeds on is mind boggling. Politically, socially, psychologically, dramatically...it's all there. The "serial storytelling" is the package in which this precious gem is presented, and it's one of my favorite aspects of the show. My dad asked me if he could just watch an episode to see if he liked it. Emphatically, no. Can you judge Hamlet by only one scene? Unlike most shows, and certainly unlike other cop shows, each episode of The Wire is not an open and shut case. There's often no resolution at all when the credits roll. Instead, each season deals with one long narrative arc, and it takes its time building its momentum. It works carefully to plant the right seeds and nurture the soil before tending to the plants. The payoffs, therefore, are huge.

From the Philadelphia Daily News:

What "The Wire" is, is the best show on television, and perhaps surprisingly for a series whose focus is often on casual corruption and its not-so-casual consequences, one of the most entertaining.

That's right, entertaining. I can preach all day long about the artistic achievements and the important insights and the glaring honesty of The Wire and blah blah blah, but the bottom line is I wouldn't love it like I do if it weren't so damn watchable. Once you get into it, you're hooked. You're hooked on the dialogue, the humor, the acting, the drama, and the excitement. You gobble it up effortlessly. Then you want to talk about it for three days.

"The Wire" is co-written by ex-cop Ed Burns and former Baltimore Sun reporter David Simon, who imbues the show with the kind of stark realism and street-level grittiness he brought as a writer to critical faves "Homicide: Life on the Streets" and HBO's "The Corner." (Simon also wrote "Homicide," the book that the TV series was based on, and he and Burns coauthored "The Corner," another nonfiction work about Baltimore.) Shunning the black-and-white simplicity of most TV police dramas, Simon examines the parallel lives of both the drug dealers and the cops, finding a morally skewed universe where the dealers are pragmatic entrepreneurs and the cops are apathetic political animals driven more by ambition than altruism. Reflecting the nihilistic vision put forth in "Traffic," "The Wire" depicts the drug war as a perpetual, misguided exercise in futility. At the end of the day, the show argues, junkies will be junkies, dealers will be there to supply them, and the system will always be one step behind both of them. As one overzealous detective lectures another in the opening episode, the term "drug war" is a misnomer: "wars end."

There's a great interview with David Simon following that introduction. After you watch the first season, go back and read it. You'll realize how visionary the show is compared to most dramas. There's definitely a point of view, and it isn't hard to reconcile the tone of the show with Simon's answers.

If you've made it this far (and I doubt that you have) I hope you're thinking that maybe you'll give that cop show a chance after all. I can't promise you'll like it - it may simply not be your cup of tea - but if you commit to the 13 episodes of the first season I guarantee you'll at least recognize the qualities we've been talking about here. If you do dig it, sail on. Each season is more sophisticated than the last. I've been liking season four, and I'm nervous about what lies ahead for these characters.

I don't own the first year, but I do have season two if anyone wants to borrow it. Go on now - just one puff won't hurt. 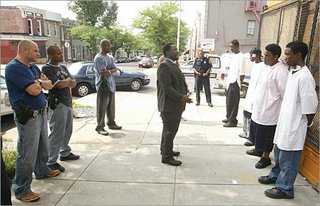