Posted by Ben
This should have happened some time ago, for this, this, this and this. 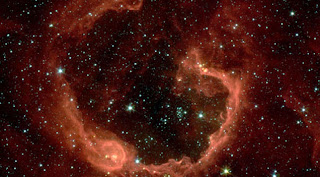 A couple of days I woke up to the news that a man had chopped off his penis in a busy London restaurant. One thought flashed through my mind, "post it". It would have been easy to do, a nice little quip about improvising a tip, or introducing a new alternative to the traditional star rating system of eateries and I could barely contain myself when thoughts turned to the photo/caption possibilities presented.

The day wore on however and more news filtered through. A planet has been discovered, big whoop, but this is no ordinary planet, for it seems to have the right conditions (warmth, possibility of water) to support life.


Yes, life on another planet; I feel that the the concept of us being totally alone in this universe is narrow minded and naive, but to perhaps be on the verge of discovering another civilisation is mind boggling to me. I don't know if we'd be able to take it, frankly, I was blown away when I saw an Okapi in the zoo, it looked like something from outer space. The gravity on this planet is stronger, so apparently the bones of any creatures would have to be heavier and bigger, their year is over in 13 days as it is very close to the sun (it doesn't explode or anything because the star is a red dwarf so is cooler) so they'd be hundreds of years old, and guess what? It's only 20 light years away. This news has also alerted me to the fact that I need to patent my time travel idea; as I think it sounds like they'll be needing it:

By 2020, it should be possible for a telescope to take a close look at the planet, which has not yet been named, to see if there is any sign of life.

Pondering on this news I resolved that my posts would forever shy away from the man chopping his penis off, the open goal, the slam dunk, the easy post. From now on it's substance or nothing, who will get to peer through the telescope first, what do we do if we see someone with two heads with genitalia where their arm pits should be and vice versa? Would there be an immediate expedition to meet our new found cosmos neighbours? Should the planet be afforded rights so as not to be colonised or enslaved by our leaders? What do we name it?

My feeling is that is more than light years keeping us from our first encounter. Down here on Earth we really aren't doing a stand up job at all. The U.S. will soon make history by trying an alleged child war criminal.

Omar Khadr was taken into custody in Afghanistan 5 years ago when he was 15. His defence team say he was 10 when the crimes he is accused of took place. A ten year old. If my mind boggled at coming face to face with E.T. when I'm 50, it positively exploded at the thought that not only are child combatants a sadly all to common occurence across the globe, but that they are also dealt with in such a manner by people who probabaly have grandkids older than he was. I'm not shocked, but I do think that before we even begin contemplating initiating contact with a life form from another solar system, we need to work out a way of treating people better here.

All these thoughts ran through my mind, the sky above me seemed to shrink and engulf me at the same time, I marvelled at the thought that all this muck around us is only one world, one possibility, I despaired at the possibility that this muck may be about to extend its reach and plant its horrifying flag on a world we don't yet know and that this new world may contain more muck we could only imagine.


Then I read this on The Guardian's ticker:

And all was right with the world. God bless you you foppish, public school, charmingly befuddled one trick pony. (I believe it caught the eye of another discerning blogger).

Posted by Ben
The Joker turned 70 yesterday. 5 quotes, which films?

1) "I see men, sixty, seventy years old breaking their balls to stay fit! What for? When I die, I want to be sick, not healthy".

5) "I want the people to know that they still have 2 out of 3 branches of the government working for them, and that ain't bad".

Posted by Ben
I asked you how the elders of a Sudanese community resolved an incident where a man had been humping another man's goat.

Matt answered that the man was forced to have relations with the goat repeatedly to banish all amourous feelings the man had for Billy Goat Gruff. Niki wondered whether he was made to eat the goat.

Wonder no more people, the answer is here; he was forced to marry the goat:

"We have given him the goat, and as far as we know they are still together," Mr Alifi said".

So, I reckon two pretty good guesses, no outright winner but I think Matt's is closest, though if you want to appeal this decision Niki, feel free.

I'll leave you with Mr Alifi's description of the event.

"It was around midnight when Tombe came to do his nonsense on my goat, and I was already in bed inside my house. Suddenly , I heard the goat make a loud noise. Immediately, I rushed outside to find Mr Tombe was naked and engaged in a relation with my goat . When I asked him what are you doing there, he fell off the back of the goat, so I captured and tied him up”. 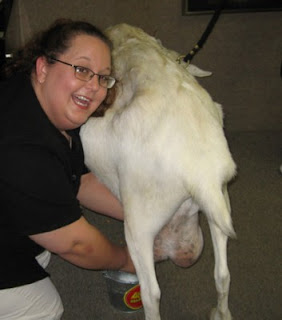 You Can Take the Boy Out of the Trailer...

Posted by Webmaster
Or can you?

Via The Poor Man, I recently learned that when Dick Cheney travels by plane, he apparently stays inside an Airstream trailer that is inside the plane:

Airstream’s appeal seems to have few limits, and indeed a powerful world traveler recently provided proof of its persistent appeal. On a trip to Asia in February, Vice President Dick Cheney traveled in an Airstream — inside an airplane.

Mark Silva, chief of the Washington bureau of The Chicago Tribune, accompanied the vice president as the press corps’ pool print reporter. The group flew on a huge gray C-17 cargo plane that the Air Force calls the Spirit of Strom Thurmond, in honor of the late senator. Mr. Silva said that when he boarded he noted the familiar outline of the Airstream roof inside the vast fuselage.

“I crawled on the floor to look at the nameplate,” Mr. Silva said, confirming that it read “Airstream, Jackson Center, Ohio.” Inside, Mr. Silva said in an interview, “there were plush leather chairs, blue-gray carpet, wood paneling, recessed lighting and a TV and DVD player.” He said the Airstream reminded him of one of the first he had seen, on the cover of a Ry Cooder record album from 1970. “The Airstream is the symbol of taking it on the road with style,” he added.

Here, apparently, is a picture: 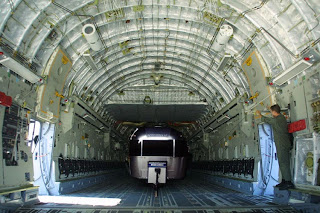 Putting aside the "Spirit of Strom Thurmond" (low hanging fruit), this raises an obvious question: What does Dick Cheney travel in inside his trailer inside his airplane? You should be able to vote once per day; you can vote for all that apply:

Write-in votes in the comments will also be counted.

Could I Please Have a Number Nine, Sir?

Posted by Webmaster
I didn't think much of the concept: NBA star spends an afternoon working the drive-thru window of McDonald's. It strikes me as more than a little bit condescending to have a guy who gets paid millions of dollars a year to play basketball goofing off at a job that most people get stuck working out of desperation. Still, this video is pretty funny and makes me like Baron Davis.

And yes, David Letterman did it first.

Posted by Ben
7 days seemed the appropriate amount of time to let the dust settle on the monumental Hail Mary that Matthew dropped on our lives last Sunday. We will forever be grateful to him, and rest assured there's a commemorative post in the pipelines, though I feel dwarfed by the enormity of the achievement.

Lots of things have happened in between I suppose, though none of them could really come close to an evening in oo de lallying it up, and laughing when the phony King of England says he has a dirty thumb.

Seems like the thing to do though is to get back on the ol' wagon and start posting again...I feel like we don't need much, just a gentle quiz as we prepare for Monday to spoil everything:

A Sudanese man was startled by a strange noise after midnight; rushing outside he interrupted a man who was having sex with one of his goats. He duly bound the farm yard Casanova and put the issue before the tribal elders who decided on an appropriate resolution to the situation; first correct answer in comments wins - no consultation of Papa Google for 24 hrs.

Also, I suppose it would be remiss of me not to dwell on the troubling news that Wolfowitz has a girlfriend, and wonder at how this ended happily for all: 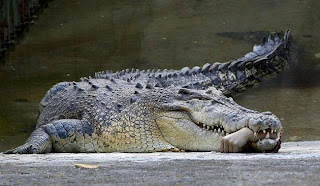 Posted by Webmaster
Golly, what a day! 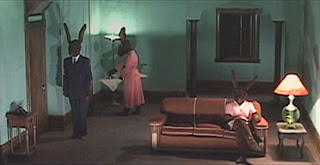 Greetings from Hell, Muckers.I no longer know whether it is today or tomorrow. Perhaps it is yesterday.

I will return. Keep it live.

I Know It's Only Dad, But I like It

Posted by Ben
Prune faced geriatric rock icon Keith Richards/Captain Sparrow V.1 has done a lot of crazy stuff in his life, most of which he has probabaly forgotten.

One thing he has apparently NOT done though, is cut his dad's ashes with cocaine and snorted them. Leather face recently told NME magazine that;

"The strangest thing I've tried to snort? My father. I snorted my father...He was cremated and I couldn't resist grinding him up with a little bit of blow. My dad wouldn't have cared, he didn't give a s**t".

But in a statement on the Rolling Stones website he claimed;

"The complete story is lost in the usual slanting! The truth of the matter is that I planted a sturdy English Oak. I took the lid off the box of ashes and he is now growing oak trees and would love me for it!!! I was trying to say how tight Bert and I were. That tight!!! I wouldn't take cocaine at this point in my life unless I wished to commit suicide.''

Of course Keith, we believe you.