Short Back and Sides Sir? 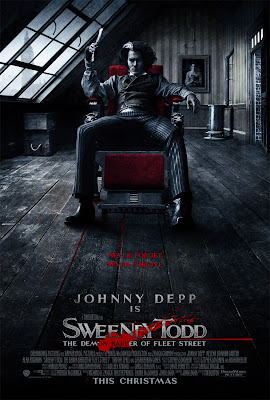 Posted by Ben
Prisons are generally unhappy places to be. Imagine if they had a suggestion box so that inmates could suggest ways to improve the day to day life of prison life. Imagine if one individual saw a chance to live out his fantasy. Imagine if the individuals charged with running that prison listened to that particular suggestion and actually put it into place.

Well, I imagine the result would look something like this.

Posted by Webmaster
I have recently decided that I want to sell my entire CD collection, something in the neighborhood of 600 or so discs. I have converted everything to mp3s, it's all backed up on DVDs and on my hard drive. I have no use for actual CDs anymore and we don't even have a decent CD player in the house.

Obviously, I would like to make as much money as possible. Equally obviously, I would like to expend little or no effort. What is the best way to accomplish these goals? The only obvious methods would either pay too little (taking them all to Plan 9) or require way too much time (eBay, Amazon marketplace). I would be thrilled to get $5 per disc, but maybe that unrealistic. I don't know. But I'm sure one of you has a great idea of how I can rid of all these discs and at the same time make boatloads of money.

Source:
It's no secret how we here at the Muck feel about The Wire. It doesn't get the props it deserves in terms of viewing figures, but it certainly gets the critic's seal of approval along with it's small but enamoured fan base; it speaks volumes that salon.com can describe the show as
a "Homeric epic of modern America"and not be guilty of overstatement.

We could go on attempting to wax lyrical but I'm not here for that right now. I'm here to talk about a component of the shows appeal that rarely gets mentioned - the fashion. My inspiration for this was Bodie, the man's coolness knows no bounds, I wanted to do a little homage to his stylin' here but haven't been able to find that many pics. Any of you fashion gurus out there who can also screen grab please help and let's have an inter blog Wire fashion show.
Here's one to start, how fucking cool does Bubbles (and, of course, Bodie) look in this shot? 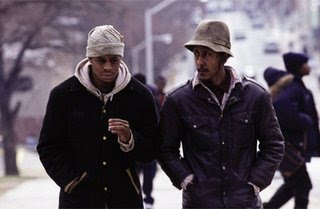 Clip From I'M NOT THERE

Posted by Parm
I thought VELVET GOLDMINE was kinda dumb. This one looks really good to me though:

To discuss psychology, medieval scholarship devised another ingenious conceit: The Mind Worm. Suppose a creature had the power to burrow into the brain & come to know an individual completely-dreams, fears, strength, weakness. Suppose that this mind worm also has the power to cause events in this world. It could then create a specific happening geared to the unique nature of that person that would trigger a one-of-a-kind adventure, a quest that would force him to use himself to the limit, to live to his deepest and fullest. Whether a tragedy or fulfillment, this quest would reveal his humanity absolutely. 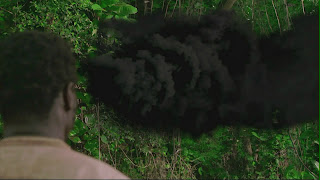 If I'm right, this would be the second time I have discovered a Lost allusion to a book about the craft of writing. It makes sense to me that those nerds would have spent an inordinate about of time reading about storytelling because, despite all the griping, I still feel that on a macro level that show features some of the best storytelling in the history of the medium.
Permalink || |

Posted by Ben
This is photo of our own dear Queen is not photoshopped. It's scary. It's unnerving. It's funny.

WHAT, prey tell, led to Queenie doing her zombie face for the cameras?? 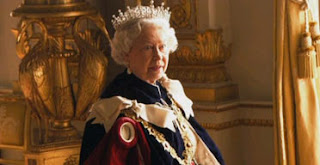 Posted by Parm
wow - my second post of the day.

this is your official heads up about a new TV show that has the potential to hook me this fall. it's called "pushin' daisies," and while it may very well suck, it's got a lot going for it. namely:

the premise - a man has the ability to resurrect the dead by touching them. then he can kill them for good if he touches them again. the girl he has a crush on dies, so he kisses her to bring her back. they fall in love...but they can never touch again! meanwhile, he brings back murder victims and asks them to identify the killer, then he kills them again. now, some of you out there will think that this sounds incredibly retarded. well, some of you out there have no imagination.

barry sonnenfeld - one of the better popcorn movie directors, and the man behind the colorful look "pushin' daisies" supposedly has

anna friel - the lead actress. british and cute. for the curious, i recommend turning off that safe search and doing a little google image search
Permalink || |

"A normal bloke who likes a bit of torture."

Posted by Parm
I've been thinking lately about outstanding performances in film and TV. The kind of masterful acting that can turn a bad movie into something memorable, or a good movie into a great one. The kind you still talk about years after having seen it. The kind that leaves you questioning the very sanity of the performer.

Recently, I watched CHOPPER, a weak movie with a mind blowing performance by Eric Bana. That's going to start my own list off. I'd like to know what springs to your mind...

Here are some of my favorites:

Eric Bana in CHOPPER
Al Pacino in DONNIE BRASCO
Gary Oldman in TRUE ROMANCE
Nicole Kidman in TO DIE FOR
Marlon Brando in A STREETCAR NAMED DESIRE
Robert Duvall in THE APOSTLE
Peter O'Toole in LAWRENCE OF ARABIA
Maria Falconetti in THE PASSION OF JOAN OF ARC
Laura Dern in INLAND EMPIRE
Faye Wong in CHUNGKING EXPRESS
James Gandolfini in THE SOPRANOS
Bjork in DANCER IN THE DARK
Philip Seymour Hoffman in CAPOTE
Robert DeNiro in TAXI DRIVER
Bill Murray in LOST IN TRANSLATION
Idris Elba in THE WIRE
Michael K. Williams in THE WIRE
Wood Harris in THE WIRE
Every motherfucker in THE WIRE
Morgan Freeman in THE SHAWSHANK REDEMPTION
Mel Gibson in LETHAL WEAPON
Robert Downey Jr. in TWO GIRLS AND A GUY
Terrance Howard in HUSTLE AND FLOW
Harrison Ford in STAR WARS and THE EMPIRE STRIKES BACK
Samuel L. Jackson in PULP FICTION
Francis McDormand in FARGO
Gene Hackman in THE CONVERSATION
Vince Vaughn in SWINGERS
Edward Norton in PRIMAL FEAR
Tom Cruise in MAGNOLIA
Kristen Bell in VERONICA MARS
Natalie Portman in THE PROFESSIONAL
That woman in the Alexander Payne vignette in PARIS JE T'AIME
Nick Nolte in anything

Ok. There are many more but I can't think of them right now. While I'm interested in everyone's personal favorites, I'm particularly looking forward to Katy's list, who is bound to highlight some less...obvious...performances.
Permalink || |