Posted by Webmaster
turns upside down.

Notes from the Muck's official island hide away, the Isle of Muck.

As the Muck revels and rejoices at being reunited with its Mojo, I'd like to let you know that I'm about to jet off for a family holiday in Scotland. While perusing the map, I spotted the delightfully named island.

I'm hoping to charter a boat or a small plane out to this magical land, which i presume is a breeding ground for dinosaurs and stuff like that. I'll let you know how I get on...if you don't hear from me, presume I've gone to youtube heaven.

While We All Ponder Jeff's Diet

Posted by Parm
I hate my current diet. My problem is that I have no idea how to eat the foods I want to eat without breaking my bank. Keeping in mind that I'm single, one wonders whether it might be more economical for me to eat out every meal than to buy large quantities of food at the supermarket, most of which will go bad before I can eat it. My goal is to stick to a nutritionally sound lacto-ovo vegetarian diet, with an eye towards full on veganism some day in the future. Currently I eat small amounts of fish (per the advice of a doctor), but I'd rather not.

In addition, I'm presently over the idea of food as entertainment. I work in an industry that pays for my meals and I'm sick and tired of over-priced, over-stuffed, and over-hyped restaurant platters. At least for the time being, I am. I would love nothing more than to go to the grocery store and buy the same five items every Sunday, eat the same meals every day, all the while balancing my nutritional needs with my food ethics and cash flow.

I'm reading about traditional Chinese diets and am considering stocking up on frozen vegetables, rice, noodles, and green tea. I take vitamins so perhaps I could get by without fruit, which I love to eat but hate to buy. I have to be in the mood for fruit, which means that most of the fruit I buy turns rotten.

Can anyone help me brainstorm some solutions?
Permalink || |

"Can I Buy Europe on Pump Four?" 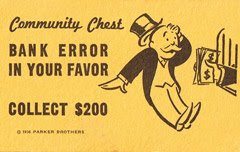 Louis CK on being charged for being broke:

Sorry, that's all I got. It's going to take awhile to get the gears turning again on this thing.
Permalink || |

For Will, By Will

Posted by Parm
I opened my email today to find this beautiful masterpiece waiting for Matt and me, along with a rather pitiful entreaty to get the Muck up and running again. Ben was already all over that shit, and for that we thank you, Sir.

And for this, Will, we thank you, too: 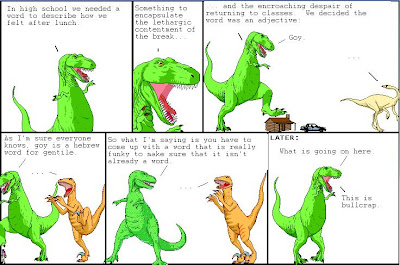 Posted by Ben
You're right Katy, you're right, it IS bull crap that there hasn't been a post on here for over a month. A MONTH!! And let's face it, it wasn't as if the previous post really deserved the limelight it got...being the mast head of the good ship Muck for a good whole MONTH!! Stop the Press 2.0 was not meant to be End the Muck 2.0.

Let me assure you of one thing though Katy. This is not the end of the blog. You know how I know? Because Jeff hasn't emailed Matt and I to tell us he's quitting. Because when I went through the blog to compile that Wu Tang video I realised there was too much of us in the posts and comments of this blog for it to ever end. Because if, IF this blog were to end, it would not just fade out with some lame post about the millionth word to enter the english language or whatever bullshit I wrote. It would implode in on itself, all muckers blazing with and against the other, laughing and crying as we posted out last youtube link.

But why's it been so long?

To be perfectly frank it's not like we've been short of material. When Michael Jackson died I had a post already in my head. I couldn't do it though. It was too big. I was reduced to my 10 year old self at the primary school disco when the bass line of Billy Jean filled the room and I froze as the pressure of wanting to look like this but knowing the shapes I threw would probabaly make people look to see if I had a medical bracelet pressed down upon my denim jacket clad shoulders.

The Muck has been my Billy Jean recently. Thudding away at me, imploring me to dance on the floor in the round, but with each passing day I look at the Muck and see that stupid 2.0 post my feet become heavier, and it becomes that much harder to get on down. Then Rasheed went to the Celtics. I KNEW I should be posting links to his last minute full court 3 point buzzer beater, of him hurling his head band into the crowd, of him lifting the Larry in 2004. But again I froze.

Well, I guess that was all a long, roundabout way of moving the pickle down the page. Let's hope this one doesn't hang around too long.